Last September, my "baby" girl turned five.  She originally wanted to have a princess birthday party, but I really, really, really wasn't feeling it.  After talking it up quite a bit, I convinced her that a Pink Pirate Party was the way to go.  I'm so glad that we did too.  It was a lot of fun! 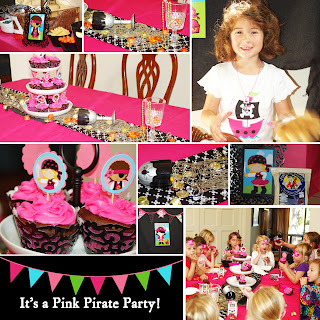 Claire's invitations reflected the pink pirate theme.  I made the invitations (with purchased graphics) and had them printed on photo paper.  Originally I was planning to print on cardstock so I could add a pirate map to the back, but I didn't get them made in time, so I opted for photos, which I could pick up from my local pro-lab. 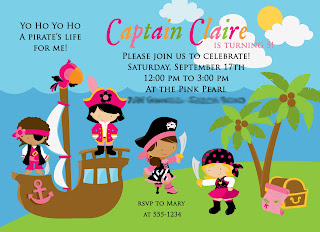 We had a total of 15 little girls at the party.  At this age, it's really a toss up whether parents will stay or not and luckily we had quite a few moms (and a few dads too) who did stay to help supervise the bunch.
As the girls were arriving, they were able to make some crafts.  I purchased some foam door hangers and frames that they could decorate with pirate themed foam stickers.  These all came from Michael's. 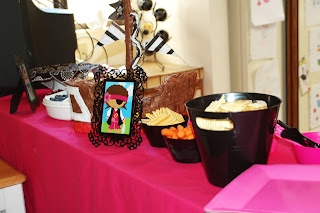 After most of the guest arrived, lunch was served!  Unfortunately, I was so busy that I didn't get any pictures of the finished buffet, but you can see some of the set up in the photo above.  I purchased several pink and black bowls and buckets from the Target Dollar spot.  Those were perfect for serving dips, carrots, chips, and trail mixes.  Pink and black paper plates and napkins came from Party City.  Of course, we had to have food fit for pink pirates!  I made octo-dogs, golden treasure (chicken) nuggets, walk the plank crackers (Club Crackers), to name a few. I also served a fruit tray and pizza. I almost forgot...what's a pirate party without some Pirate's Booty!

The buffet was decorated in a hot pink table cloth.  This is a real table cloth that I actually use for craft fairs.  I purchased two of these large circular cloths a few years ago from a Navy Exchange sidewalk sale.  They were $2 each and I have to say they were well worth it!  You can also see in the photo that we have the pirate pinata and some framed photos of The Pink Pearl's adorable crew.

Elise, my teenager, and her friend Jennifer were an invaluable help.  They put together a treasure hunt for the girls after they finished their lunch.  It started out with one scroll with a clue to the next scroll.  The scroll hunt took them all around the house and yard and finally ended at the dining room table where they could enjoy their prize, which was a cupcake!  This was so much fun for the girls and it was cute listening to them try to figure out the clues.


I am some what of a cupcake snob.  I often make modified (box) cupcakes, but I HATE canned frosting.  I made these delicious chocolate cupcakes from scratch and they were decorated with hot pink peppermint frosting and embellished with pirate cupcake toppers.  I used the food coloring gel to get the frosting that bright fuchsia. 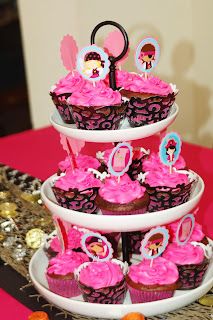 Instead of pink the tail on the donkey, we did pin the treasure on the "X."  This would have went better if I hadn't forgotten the blindfold!  Oh well...live and learn right?
After the treasure game, we hung and busted the pinata.  I have to say that I really wish that it was one of the ribbon pull-string pinatas.  The girls went through the pinata busting line more than two times before the pinata would bust.  I tihnk finally Justin had to "help" it out a bit because that sucker wasn't going to break!

Of course, what pirate girl's party is complete without her birthday shirt?  Claire wanted a pink pirate ship tee with the name of her ship, The Pink Pearl, on it.  I love the way it turned out and so did she! 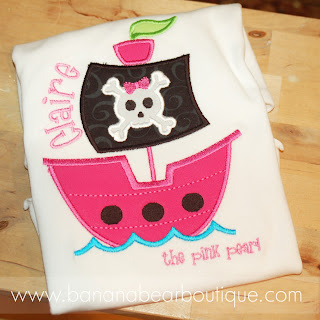 I created all of the invitations, pirate map, cupcake toppers, food labels (not shown), posters, and framed pirate photos.  If you are interested in purchasing any of those,  please email me directly at mary @ Bananabearboutique . com (without the spaces) and I can help you out.  The invitations are $15 for you to print your own or $1.85 each for me to print on cardstock (minimum of 30) or $1.25 to print on photo cards.

Banana Bear on the Web